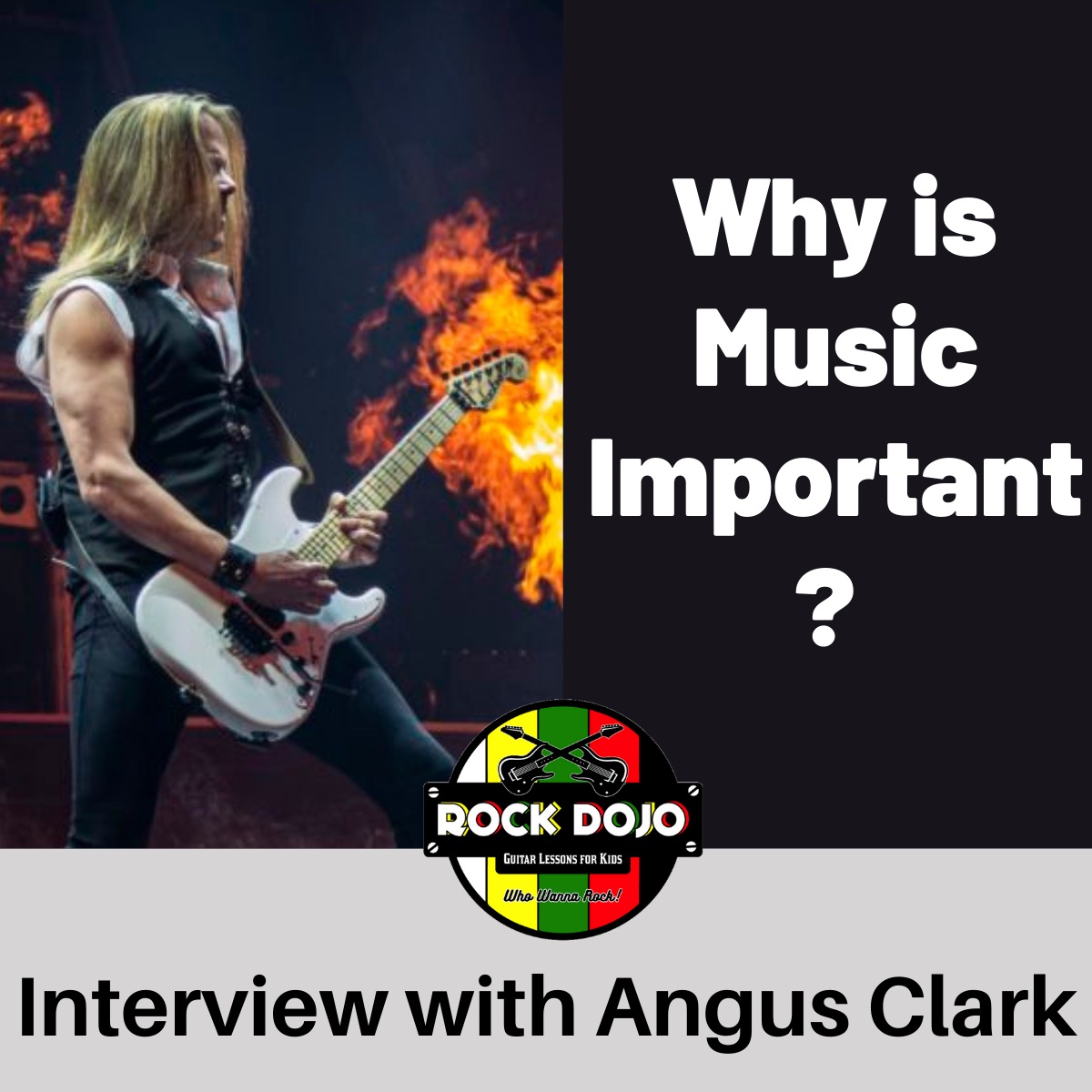 Why Is Music Important?

I think about that question a lot. That’s because I’ve witnessed firsthand the transformative power of rock guitar. Indeed, I see kids learning lifelong transferable skills like goal-setting, self-discipline, and creative expression as they learn to play the guitar. When COVID-19 hit, I decided to broaden my perspective on the benefits of music education by interviewing a handful of the world’s most renowned guitarists, musicians, and music educators and asking them a set of simple questions like: “Why is music important?”

Angus has been one of my favorite online music educators for years. In fact, my wife and I learned to play rock guitar together with his TrueFire courses, including Neoclassical Essentials, Focus On: British Metal, and Hard Rock Survival Guides. Personally, I was thrilled to discover his newest courses on rock soloing: Beyond Rock Pentatonics and Rock Pentatonic Alchemy. Based on the strength of his online guitar courses, the man was already a legend in my mind. It wasn’t until I began researching Angus more thoroughly that I realized the depth and breadth of his musical career.

For more information, go to:

Indeed, Angus has been the lead guitarist for the Platinum-Selling and Grammy-Nominated Trans-Siberian Orchestra for the last 21 years. He’s also performed with Cher, Joe Lynn Turner (Deep Purple, Rainbow), Anna Phoebe (Jethro Tull), and Kitaro. In addition, Angus performed regularly with the Tony-nominated Broadway production of “Rock of Ages” and Andrew Lloyd Weber’s “School of Rock.”

Click on the link below to watch Angus Clark’s performance from our interview.

How to Develop Your Own Voice on Guitar

Leverage the power of music education for your child with Rock Dojo’s free introductory guitar course for kids.

Why is Music Important?

At first, music provides kids with a safe space. Their personal time with music provides solace. As a child’s talent develops, however, music becomes a social connector. “Music created this whole space for me to explore my feelings about things,” Angus says. “As it became something that I knew how to do. It became a lot about how I put myself out into the world.” That’s where the shift begins to happen for musicians. Talent attracts talent and a child’s personal relationship with music becomes a social connector.

Other Guests Answer the Same Question: Why is Music Important?

This interview is part of a music education advocacy series I’m hosting called “Why Is Music Important?” Over the past few months, I spoke with some of the world’s best guitarists and leading experts in music education to discuss the benefits of music education. If you enjoyed this interview, be sure to watch some of my other interviews, including:

If you’re ready to get your child started playing the guitar the right way, then now is the perfect time to sign up for the Rock Dojo’s award-winning online guitar program for kids. The Rock Dojo’s on-demand guitar lessons for kids bring the benefits of music education directly to your home. The white belt level is the first of five guitar courses for kids, and it’s available right now. At the white belt level, your child will learn how to hold the guitar, the guitar parts, open power chords, songs on the low E-string, and so much more. Sign up today!

Brian Parham is the co-founder and creator of the Rock Dojo, an award-winning guitar program for kids. He’s also the author of three guitar method books for kids, the 2021 Steve Vai Scholarship Winner for Academic Excellence at Berklee College of Music, the 2018 Teacher of the Year by Lessons.com, and the 2018 Rising Star of Oregon by the U.S. Small Business Administration. When he’s not rocking out on the guitar, Brian enjoys reading comic books, binge-watching Cobra Kai, and spending time with his wife.