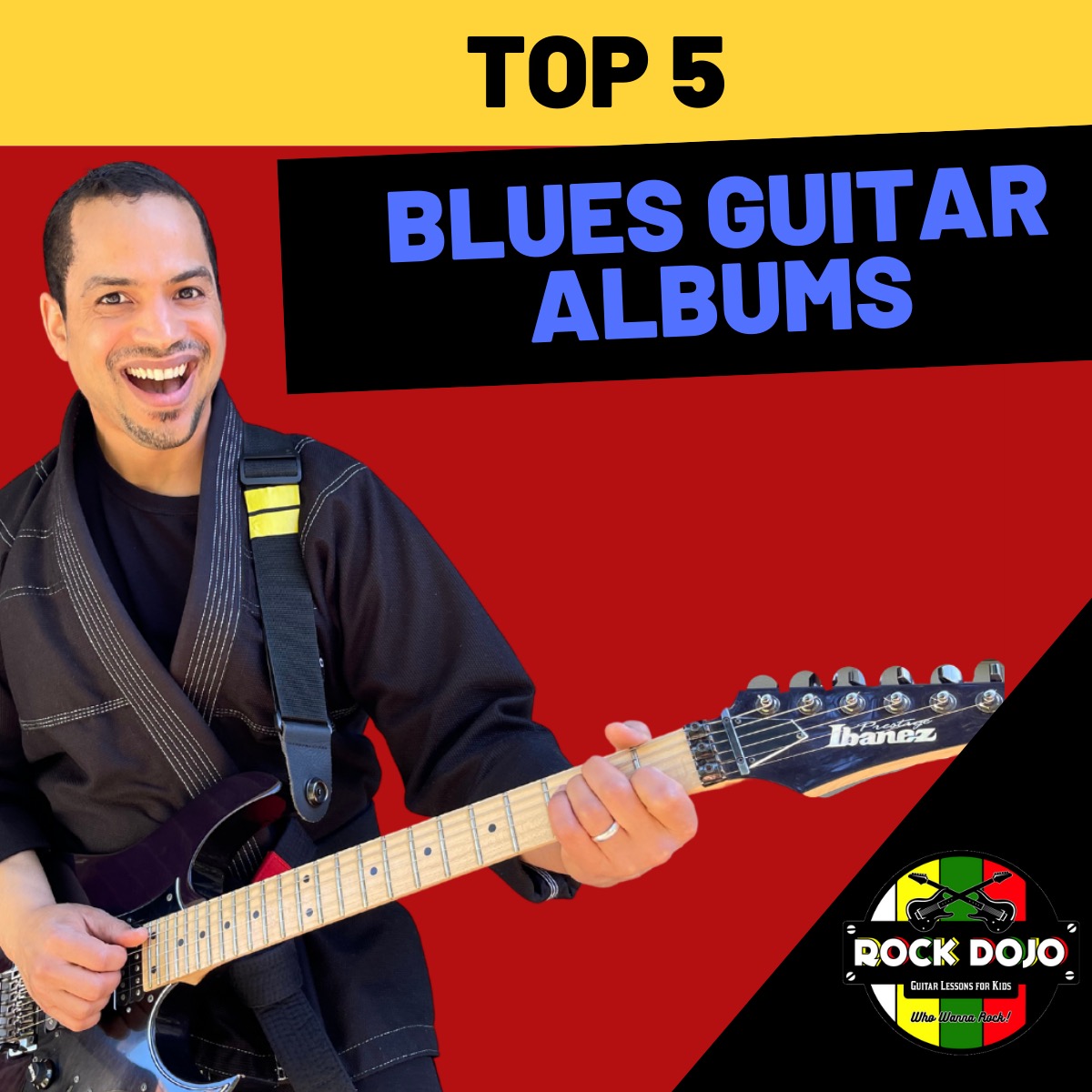 What are the top five blues guitar albums of all time? Over the last few months, I interviewed some of the world’s leading experts in music education, and they all agreed on one thing: the easiest way to raise a musically able child is to listen to lots of music.

On the other hand, some of you may not know what type of music to listen to or where to get started, so I put together this list of my personal top five blues guitar albums of all time.

Get your child started playing the guitar with Rock Dojo’s free introductory guitar course for kids.

Born in 1923 on a cotton plantation in Indianola, Mississippi, Albert King was one of thirteen children. He would go on to become a blues guitar icon influencing countless guitarists, including Eric Clapton, Stevie Ray Vaughan, and even Jimi Hendrix.

Playing a Gibson Flying V upside down and tuned to a secret tuning, King developed one of the most unique and instantly recognizable blues guitar playing styles of all time. My favorite tracks on this album are: “Crosscut Saw,” “Oh, Pretty Woman,” and “Born Under a Bad Sign.”

Stevie Ray Vaughan, aka SRV, was born in 1954 in Dallas, Texas. He was inspired to play music by his older brother and blues guitar legend Jimmy Vaughan. SRV He got a guitar when he was seven years old and started learning records by ear. His musical heroes were Otis Rush, Albert King, and Jimi Hendrix. My favorite tracks on this album are: “Lenny,” “Texas Flood,” and “Pride and Joy.”

Albert, “The Iceman” Collins, was born in 1932 in Leona, Texas. He is widely known as “The Master of the Telecaster.” He was widely known for his powerful guitar solos, his searing tone, and his altered tunings. In fact, Albert Collins played tuned to the key of an open F# minor chord with a capo in just one or two pentatonic boxes on the guitar! His style was largely influenced by his cousin and blues guitar icon Lightnin’ Hopkins. He also cites John Lee Hooker as a personal inspiration for picking up the guitar. My favorite tracks include: “Ice Pick,” “Honey Hush,” and “Avalanche.”

2. How Blue Can You Get by BB King

BB King has been called the “unquestionable the greatest ambassador of the blues” by musicologists. BB King’s accomplishments are astonishing. Born in 1925 on a cotton plantation in Itta Bena, Mississippi, BB King has inspired generations of guitar players, including Eric Clapton, Mike Bloomfield, and John Mayer. Mixing the major pentatonic and minor pentatonic scales seamlessly, BB’s style is instantly recognizable. While every cut on this record is a winner, my favorite tracks are “Chains and Things,” “Caladonia,” and “Night Life.”

It’s hard to imagine Jimi Hendrix’s career spanned just four short years, but his legacy lives on. Born in Seattle, Washington, in 1942, Hendrix is widely considered the greatest and most influential guitarist of all time. Playing a Fender Stratocaster through overdriven amplifiers, Hendrix redefined rock guitar. He’s influenced nearly every guitar god over the past fifty years, including Stevie Ray Vaughan, Steve Vai, and Joe Satriani. My favorite tracks are “Red House,” “Born Under a Bad Sign,” and “Voodoo Chile Blues.”

If you enjoyed this blog post, please sign up for Rock Dojo’s bi-weekly newsletter to receive a free introductory guitar course for kids. Plus, you’ll have access to tons of great articles like this one, class announcements, and special discounts. It’s free to register, and you can cancel at any time. Sign up today!

Brian Parham is the co-founder and creator of the Rock Dojo, an award-winning guitar program for kids. He’s also the author of three guitar method books for kids, the 2021 Steve Vai Scholarship Winner for Academic Excellence at Berklee College of Music, the 2018 Teacher of the Year by Lessons.com, and the 2018 Rising Star of Oregon by the U.S. Small Business Administration. When he’s not rocking out on the guitar, Brian enjoys reading comic books, binge-watching Cobra Kai, and spending time with his wife.