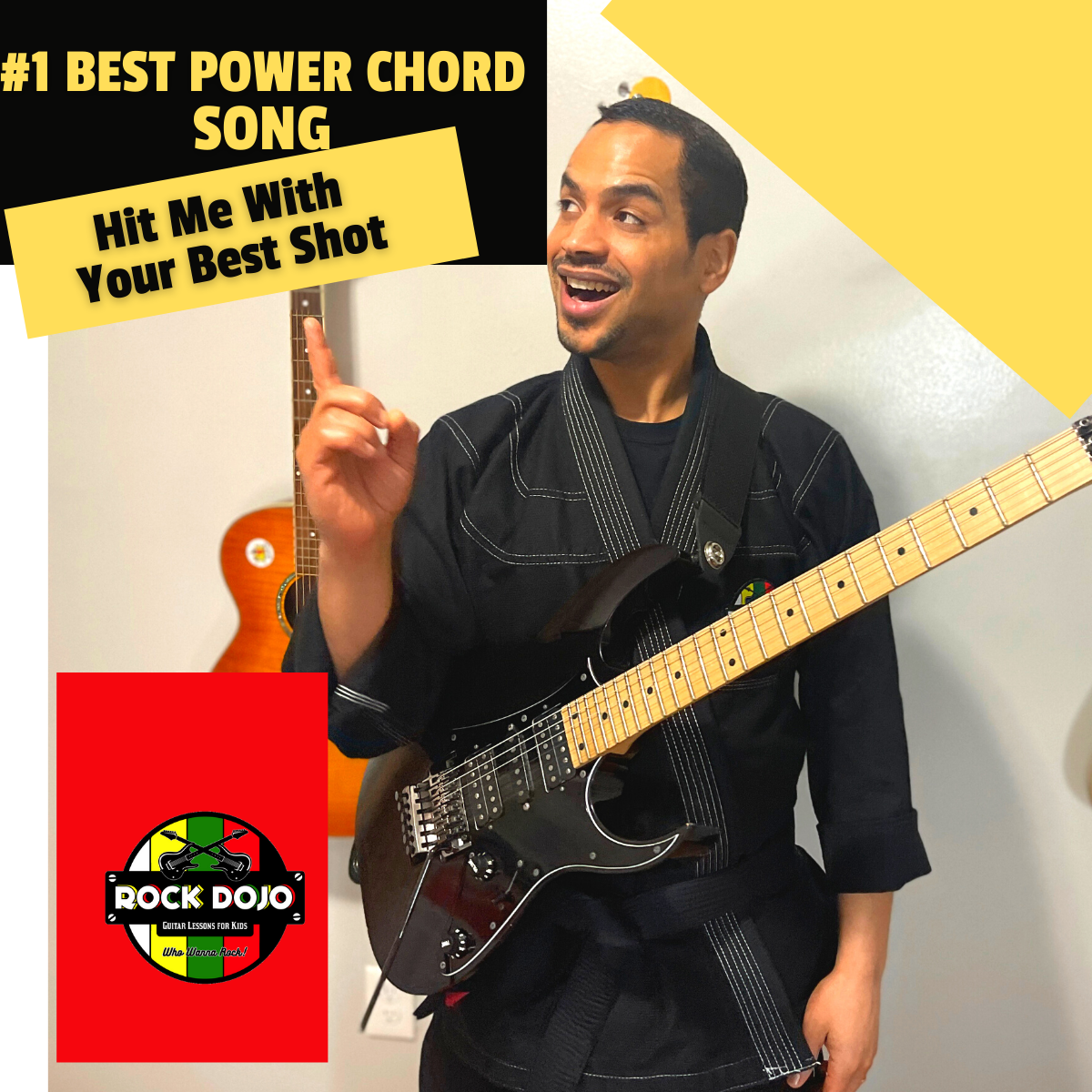 Welcome to the Rock Dojo, my name is Brian Parham, and I will be your guitar sensei.

In this series, you’re going to learn how to play five of the greatest power chord songs of all-time.

It doesn’t matter if you’re six years old or sixty-six years old. If you’re just getting started learning how to play the guitar, then this lesson is for you!

And if you stick around to the end of the video, I have a free bonus for you.

What is a Power Chord?

A power chord is a two-note chord. It built off the first and the fifth degree of any major scale. On the guitar, a fifth is one string below and two frets above. Since there is no third degree in a power chord, it’s neither major nor minor, which means you can substitute power chords for both major and minor chords. For those reasons, you can play hundreds of songs with just a few easy chord shapes. Plus, power chords sound fantastic, especially on an electric guitar with the distortion cranked up.

What is an Open Power Chord?

The first type of chord you should learn on the guitar is the open power chord because they sound fantastic. Plus, power chords are super easy to play.

Just play the open string like this. Then place your index fingers on the second fret of the D string. When you play the two strings two together, you are playing an open A power chord.

It’s identified as an open power chord because the A string is open.

Now, it would be a great time to pause the video and practice your open A string power chord.

You could also practice the open E and open D power chords. They are almost the same.

The open E power chord looks and sounds like this:

The open D power chord looks and sounds like this:

What Are Moveable Power Chords

We identify moveable power chords be the note fretted by the index finger. In this case, I’m playing an E power chord because my index finger is on the 7th fret of the A string, which is an E note.

Why Are Power Chords So Cool?

Now, “Hit Me with Your Best Shot” is up next, but please hit the thumbs up button if you like the video.

How to Play “Hit Me With Your Best Shot” on Guitar

“Hit Me with Your Best Shot” was written by Eddie Schwartz and recorded by Pat Benatar in 1980. It peaked at No. 9 on the Billboard Charts but has since become a classic rock guitar anthem played at soccer matches and baseball games.

“Hit Me with Your Best Shot” Looks and Sounds Like this:

If you have a question about the guitar, leave it in the comments section, and I’ll make sure to answer it in a future video.

And remember, every guitar master was once a beginner; the more you practice, the better you will become. ROCK!

Brian Parham is the founder and creator of the Rock Dojo, an award-winning guitar program for kids. He’s also the author of three guitar method books for kids, the 2018 Teacher of the Year by Lessons.com, the 2018 Rising Star of Oregon by the Small Business Administration, and an award-winning artist. He’s currently pursuing an Advanced Professional Guitar Certification from Berklee School of Music. When he’s not rocking out on the guitar, Brian enjoys reading comic books, binge-watching Cobra Kai, and spending time with his wife.