How to Leverage the Power of 1% Better for Astonishing Results

Learning to play the guitar can be downright daunting at first because there’s just so much to learn. For example, every guitarist needs to learn chords, right? Therein alone is a lifetime of study including open chords, barre chords, power chords, triads, seventh chords, inversions, progressions, yikes!

We haven’t even begun talking about scales, rhythm, songs, or performance. No wonder 90% of the people learning to play the guitar quit within the first year according to Fender.

If only more people understood the power of compounding interest and how to leverage 1% better every day for astonishing results! That’s the kaizen way.

Kaizen is a post World War II concept developed in Japan. It’s a compound of two words that roughly translates as “good change.” Today, kaizen is used generally understood as a commitment to continuous improvement achieved via small gains.

Originally developed by the manufacturing sector to lower waste and improve production, kaizen is extremely popular in the business world because of its effectiveness. That being said, it can be applied to any area of learning, including the guitar!

Kaizen is all about the small wins. It’s the commitment to 1% better every day. Although 1% better doesn’t sound like much, it can actually lead to astonishing results over time because of the power of compounding interest. 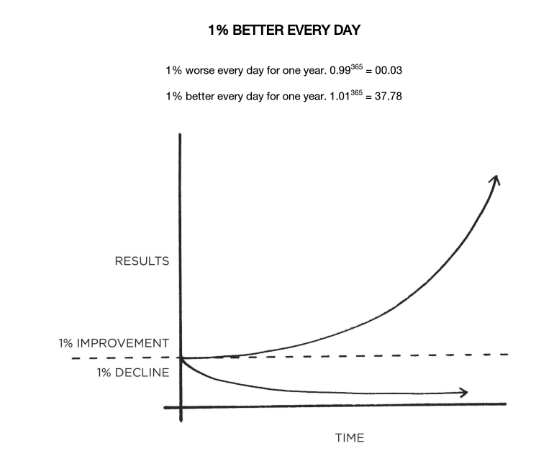 Albert Einstein famously said, “Compound interest is the 8th Wonder of the World. He who understands it, earns it; he who doesn’t, pays it.”

As we can see from the chart above, one percent better every day over the course of one year leads to an improvement 37.78 times better! Conversely, one-percent worse every day for one year is bad. Really, really bad.

What Does Kaizen Have to do With the Learning to Play the Guitar?

The key to learning to play the guitar—or anything is else, for that —is committing to small victories. Too many people make the mistake of looking for the big wins early on. Maybe there’s a guy who’s just getting started playing the guitar, and he tries to tackle Randy Rhoads blistering solo in Crazy Train.

Or maybe there’s a girl who wants to sing and play the guitar at the same time. Instead of starting with a simple folk song, or even a nursery rhyme, she tries to tackle the Beatles iconic “Blackbird” as a first song. As the Grinch once said, “Nice kid, bad command of the learning process.” Okay, maybe the Grinch didn’t actually say that, but he could have!

Now, I realize these examples sound extreme, but people do this sort of thing every day. In fact, I’ve done it myself, and I’ve gotten frustrated and quit the guitar for a decade because of it! Don’t fall for the same stupid traps I’ve fallen for.

Instead, focus on the small wins. For example, a great achievement for a beginning guitarist is learning to play an easy riff like Iron Man on the low E-String. Then, learn another. After that, learn some open chords. A, D, & G sound amazing together with distortion when played on an electric guitar.

Each of these represents a small victory. Over time, small victories add up to astonishing gains!

Kaizen is the commitment to small victories.

Sign up for Rock Dojo guitar lessons today. Want to learn more? Check out Rock Dojo’s FAQs and learn how our colored-belt systems works (here’s a hint: it’s like karate and you graduate with a black belt). Do you have a specific question about our guitar lessons for kids? Drop us a line at (503) 484-6417. Sign up for after-school guitar lessons in Portland, OR, on the Rock Dojo Find a Class page.