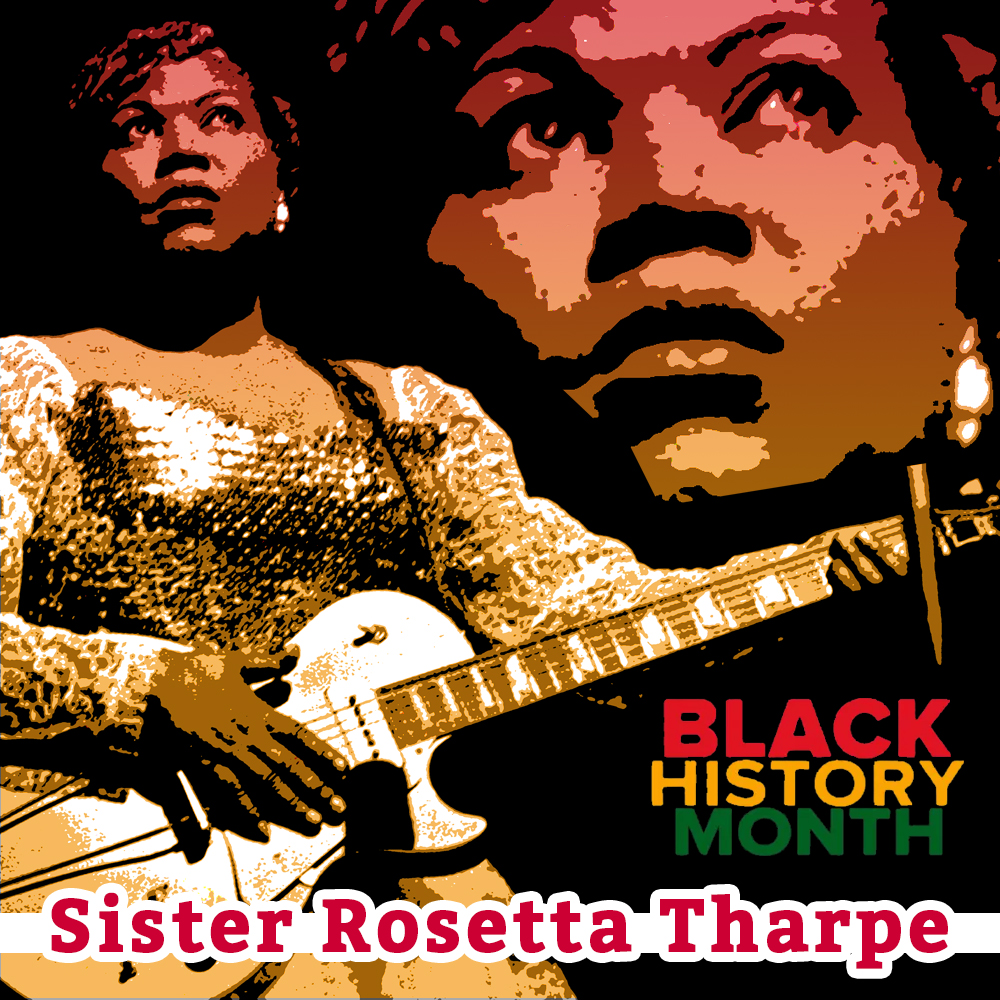 We are kicking off our celebration of Top Guitarists for Black History Month with the Godmother of Rock and Roll and the Original Soul Sister.

Although Sister Rosetta Tharpe reached celebrity status with her hit single, “Rock Me” by the time she was 23 in 1938, she does not always get recognition for getting the influence she has had in music history. Only within the last decade has there been a resurgence of interests and recognition. In 2007 she was posthumously inducted into the Blues Hall of Fame. In 2011 the BBC aired a one-hour documentary and more recently, in 2018, a biography has been written about her titled, “Shout, Sister, Shout! The Untold Story of Rock-and-roll Trailblazer Sister Rosetta Tharpe.”

Even in her own time, despite her success, Sister Rosetta Tharpe did not reach the level of fame or recognition as her peers. She was a black queer woman in a world of segregation when sexual preferences were kept private, and surrounded by a male-dominated industry. None of this prevented her from making music, recording hit records, and touring the world.

What made Sister Rosetta Tharpe so unique? She was one of the first artists to use heavy distortion on her electric guitar. The distortion is what gives electric guitar music that fuzzy, growling gritty tone. This sound paired with seemingly contradictory spiritual gospel bluesy themes was new to the world and eventually adopted by guitarists like Eric Clapton and Keith Richards.

The Godmother of Rock ‘n’ Roll

Her influence has been acknowledged by the titans of rock. She started Little Richard’s career by inviting him on stage to perform for his first time in public. Johnny Cash cited her as his favorite vocalist as a child. The entire rock ‘n’ roll movement of the 50s was a direct result of Thorpe’s fusion of gospel and electric guitar.

The two embedded videos below are a great way to celebrate Sister Rosetta Tharpe. The first video is a mashup of her greatest guitar solos. You won’t believe they played music like this 80 years ago!

The next video is an amazing history of the Godmother of Rock. This brief vignette debuted at the rock and roll hall of fame in 2018.

The Next Sister Rosetta Tharpe

Sister Rosetta picked up her first guitar at the age of four. Your kid could be the next guitar pioneer. Our classes start at the age of 6. Rock Dojo is an award-winning guitar lesson system trusted by parents and kids. It is designed to help kids (aged 6-12) learn the guitar so fast they will be able to play and write their own songs by the time they get a Black Belt in rock!

To start your free lessons add your name to our email list. Cancel anytime. Click the following link to learn more about our three free guitar lessons for kids.